TRAVEL AND DON'T WRITE IT DOWN

Viaja y no lo escribas [Travel and Don’t Write It Down] is an apocryphal story that Robert Derain attributes to Rita Malú, as narrated by Enrique Vila-Matas in Bartleby & Co. The protagonist of the story is a travel writer who visits India an meets an old pilgrim who reads his fortune. After that encounter, the foreign writer never writes another word.

Both Robert Derain and Rita Malú are fictional characters invented by Vila-Matas who represent two ‘non’ writers, two individuals suffering from “Bartlevy’s syndrome”, two representatives of the literature of denial, of the refusal to write.

Another travel writer (in this case not fictitious) inspired Walter Benjamin’s 1939 essay “The Story Teller”. The German author reviewed a compendium of short stories by Nikolai Leskov (1831-1895) that, always told from first-hand knowledge and experience, are closer to the work of a chronicler –one who narrates known facts- than that of a novelist with the ability to make up stories unrelated to factual experience. Based on de Benjaminian premise of the loss of the value of experience, Travel and Don’t Write It Down proposes a reappraisal of specific forms of storytelling through contemporary artistic practices. To resist is to create and recreate, to change the situation, actually to be an active member of that process.1

This project is an invitation to stroll through a series of possible stories (or not), surprising narratives and anomalous readings that defy convenient and conventional logics. Travel and Don’t Write It Down features artists whose work explores the idea of narrative as the ability to exchange experiences proposing subjective reinterpretations of rituals, objects or stories that already exist but can, or need to, be retold.

Some of the pieces presented here review historical events from the perspective of lesser-known facts, the kind that don’t appear in newspapers or history textbooks. In these works, History (with a capital H) is rebutted by a handful of little stories: fanciful occurrences, tales woven from experience in daily life, narrated through metaphors; narrative games capable of linking the ordinary, the powerful and the denunciative to the simplest things. At the same time, these projects reveal the Orientalism2 that has defined the attitude of traditional and contemporary historiography towards distant cultures, though perhaps that distance is not as great as we think. They expose the relationships between power and knowledge, especially in European worldviews.

This exhibition project also includes works that sift through the past in order to rethink the present and gaze into the future, works that formulate different stories after conducting their respective investigations, questioning the concepts of archive and heritage versus waste. The archive is understood as a set of elements deemed relevant and worthy of preserving. However, archiving is more than just preserving –it also entails classifying, and when certain documents are considered more important than others this classification system excludes many, turning them into waste, into invalid elements whose extinction is practically inevitable. But sometimes certain objects, wisdoms and liturgies continue to exist on the fringes, or in distant realities, and at some point they find their way back into the archive. Some of the works in the exhibition thus offer critical perspectives of the archive, suggesting new systems of waste recovery as a valuable tool in order to make visible what has been concealed.

This project does not aim to establish analogies or to offer more or less accurate interpretations, but rather to create a series of stories that reference the other and remind storytellers of the reason d’être of the community projected in their tales. Because to continue to tell stories, modifying them and discovering new meanings, is the antidote to collective sterilisation. 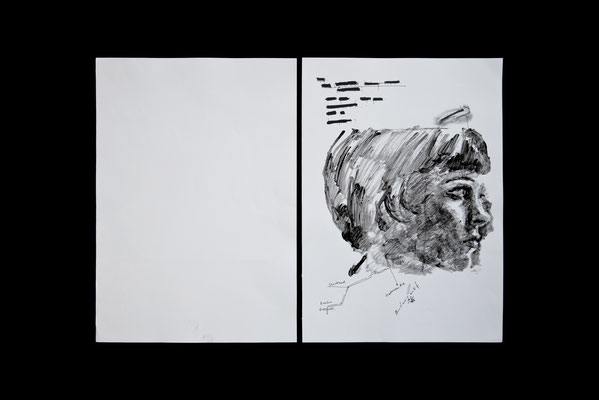 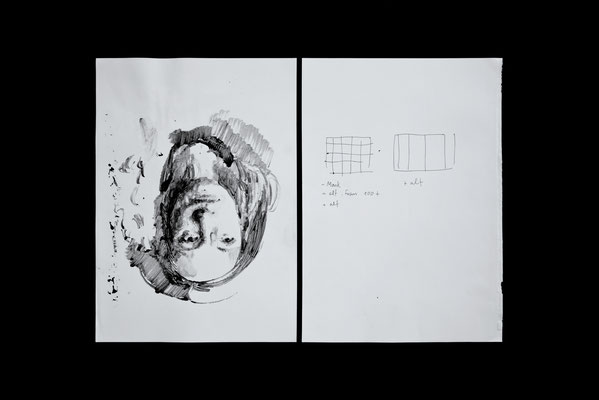 No place like home consists of a series of drawings and paintings by Alain Urrutia. The project began with the pairs of drawing and diagrams the artist sketched on maps, using shoe polish, in order to memorise addresses while searching for lodgings when he moved to London in 2014. On them we see information about the prospective houses, contact numbers and prices that Urrutia gathered in the process. The paintings were created specifically for this show and represent the carefully meditated conclusion to two years of travel, in what is both a chronological and mental journey. Urrutia’s work is characterised by the ability to regenerate a world of sensations based on the hidden and the unknown, on that which is not there. The images in his paintings are everyday references and scenes drawn from his own experience that allude to deciphered collective memory, a universe that  combines quotes, music, film references, sensations and experiences.

Text about the work No Place Like Home; VIAJA Y NO LO ESCRIBAS [Travel and Don’t Write It Down] (La Casa Encendida, Madrid).